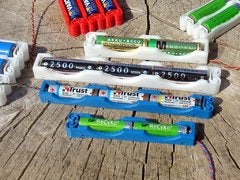 Thingiverse user pcoulbourne asked me if I could extend my flexing battery holders with integrated spring project to also support multi-cell compartments which house 2 or 3 cells in series and are held with a single plastic spring.

With more than one cell in a row the pushing force of the spring is prone to lift the batteries up at their joining point and push them out of the compartment. Also longer cells are more prone to cause warping. The solution to these problems was to add cutouts at the center of each cell to allow a better grip when manipulating the cells (and thereby reducing the warping!) and add an inside overhang between the cutouts to prevent the batteries from popping out.

The included fully parametrized SCAD file is an extension to the initial version, thus it can as well be used to generate all the single cell compartment battery holders from the initial project. However, the STLs included here are only the ones with 2- and 3-cell compartments for some of the more common cell types. I started by including ready-to print STLs for AA, AAA, C and 18650 type cells, others might follow. But of course you can easily generate multi-cell holders for any other cell type yourself by adding the corresponding module calls in the OpenScad source file.

Note that when having 2 or 3 cells secured by a single plastic spring, even small variations of the cell length may become critical, since the differences are dupli- or triplicated. Small differences can be compensated to some extent by varying the thickness of the pole contacts.

I suggest to load and unload the batteries from the plus end of the compartment (opposite side of the spring) and slide the cells there as showing in one of the pictures. Pushing the batteries through the overhang generates stress on the side walls of the case, especially for the smaller cells.

For any further details, please check out the initial version of this project.