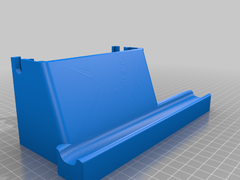 Due to buildplate dimensions and not really needing the whole width (and height) of the original I have opted to cut off portions of the dock.
However I’ve left just enough of the slant/curves in so the Steam Deck more or less registers into the groove, kind of.

Just used Microsoft 3D Builder to substract/add stuff which took quite some time but as always I’ve included the 3mf file if you want to change something. It is at a later stage where the original dock was already cut to size, but you could just add the original in and just don’t cut off left/right/bottom.

Since I’ve won (yay!) the Anker 341 USB-C Hub (7-in-1, model A8346) I’ve added a slot on the back to slide that into. You have a cable channel for its main USB-C connection on the left and right and you may want to rotate it so you can have the USB-A ports top and the HDMI/USB-C PD port on the bottom … or vice versa. Do as you like or your cable management needs.

I am using a magnetic 40 Gbps USB-C 90 degree adapter by the way, which works great! Just keep in mind to not block the exhaust port on the top of your Steam Deck by routing the cable over the power button on the right, not over the vent on its left.

Here are the products I am using in case you may want to take a look or even buy them:

*USB Type C Magnetic Adapter, USB4.0 40Gbps Data Transfer, 100W Quick Charge and 4K@60 Hz Video, but eg. Aliexpress could be a lot cheaper (got the connector in straight and angled for about 3.50 EUR each, the plugs itself can be bought seperately for even less):
www.amazon.de/?&link…

*The used link(s) is/are so-called affiliate link(s). When you buy a product using this link, I will receive a small provision. The price itself does not change. Thanks so much for your support 🙂

Side note: since Steam Deck defaults to highest resolution available you might get 4k@30 at the moment in game mode. In desktop mode you can get it to output 1080p@120 (when your display/TV supports it) so I really hope Valve gives an option to force a specific resolution. Which should happen since they plan to release their own dock and probably run into the same issues there.