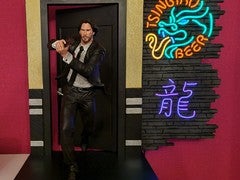 First of all: this is by no means 100% „production ready“, it has its quirks to fix after printing, but it’s manageable and more or less easy too fix.

That being said, this is how it was done:
Measured the superb Diamond Select John Wick figure and decided to attach a brick wall with some neon-like electroluminescence wire as fake neon sign(s). First I had some dragon in mind, but that was too complex to pull off with EL Wire, so I looked around for other neon advertisement like images. The later found dragon head again was too finicky. But the chinese writing on the bottom „dragon“ (hopefully haha) was fine. Then I stumbled over the „Tsingtao Beer“ neon ad installment, which seemed doable, so I traced it in Fusion 360 to create a positive extrusion of the channels and holes needed, just like with the chinese writing before.

The wall texture is from „milvet“ here on Thingiverse, sadly the remix search is broken, so I just drop the link for now: www.thingiverse.com/thing…

I combined it to the needed size, scaled it and made it two parts so it fits my 3d printers plate dimensions. After exporting the el wire channels from Fusion I positioned it in Microsoft 3D Builder and substracted it from the wall pieces.
There were some test iterations beforehand though, to find the correct diameter of the holes and channels. There even was a version with pegs at some point…
I then combined both wall pieces and painted them black, added some dark green, sand and stone gray, speckled with some light black. I still have no proper plan or idea how to paint effectively, but it’s fine the way it is I guess.
After all was dry I started adding the EL wire, which needs some cyanoacrylate glue in some points („superglue“). I soldered the different colors in series, which isn’t too hard but not easy either, especially stripping the isolation without destroying the inner phosphor coated core wire or the two „angel wire“ strands.
To mount the wall piece to the figure background I drilled two pilot holes and made them bigger, prepared two M3 screws each with 4 nuts, filled the holes with hot glue and positioned the nut/screw. After cooling I was able to unscrew the screws and mounted the wall. The glue isn’t the strongest but it works quite well (for now).
Last thing to fix is the inevitable audible buzzing of the EL inverter (which output is at about 100V/1800Hz). One thing you could do is to fill the transformer with epoxy, wax, thinned silicone, … but I don’t know about overheating or other faults this could cause.

EL Wire kit with 5 different colors, but eg Aliexpress could be a lot cheaper:
amzn.to/3doUR1W

*The used link(s) is a so-called affiliate one. When you buy a product using this link, I will receive a small provision. The price itself does not change. Thanks so much for your support 🙂